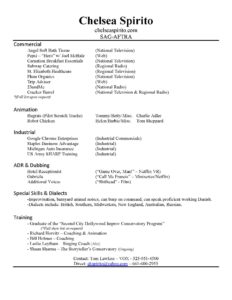 Chelsea has been working in the entertainment industry since she was 17 and has gained well rounded experience in front of as well as behind the mic & camera. As a union voice over talent shes worked for companies such as Netflix, Pepsi, Subway, Google, Staples, Nickelodeon and many others! She can be heard in the upcoming season 10 of Adult Swim’s Robot Chicken this Fall & hopes to serve on the SAG-AFTRA Voice Over committee in the near future.
As a student of learning and an avid fan of animation, Chelsea would love to lend her abilities to CalArts students seeking voice over talent on their projects!
http://chelseaspirito.com/
Show Contact Information